WHAT YOU CAN DO TO PREVENT CHOLERA FROM SPREADING IN KENYA

Cholera is an infectious disease that causes severe watery diarrhea, which can lead to dehydration and even death within hours if untreated. There is currently an outbreak of Cholera in Kenya, and if urgent action is not taken immediately many lives may be at stake. Given its short incubation period, if unchecked Cholera can quickly overwhelm the health care facilities.

In Kenya, sewage and clean water are coming closer and closer together as rural to urban migration grows and the cities are left unprepared. The country does not have adequate large-scale wastewater processing plants yet, and thus over 80% of the population living off the grid. And according to the World Bank, Kenya won’t be able to afford such infrastructure for many years.

Nonetheless, the cities are growing and generating more and more wastewater per acre every year.

To give you an idea of the problem—an apartment building with 60 3-bedroom apartments generates over 50k liters of waste water a day, sits on half an acre, and has a bore hole.

Just think about all the new apartment buildings all over town! That’s a LOT of waste to deal with. And it’s very expensive for developers.

It costs roughly 10,000/- a day to hire Exhauster trucks to carry the sewage away. So to save money, many developers pump the raw sewer into storm water drainage when it rains.

They use the cover of flooding streets to hide this, and as a result, the water mixes with rain water and seeps into the boreholes.

We’ve seen this in a number of upmarket areas, such as Karen and the Parklands.

This is extremely dangerous and if it continues unchecked, many lives will be at stake.

How Can We Prevent Cholera?

The spread of Cholera can be prevented by treating sewage and disinfecting effluent before it is discharged into the environment or comes into contact with people. Given the state of the centralized sewer system and a lack of the same in most areas, off‐grid systems provide the best way to prevent cholera outbreaks.

The country as a whole may not have the funds to invest in large-scale wastewater treatment at this point, but that does not mean that there is no hope.

Just like with phones, it was once infeasible to think of connecting each home to the telephone grid due to the tremendous cost of expensive copper wires. This left us with only 300,000 phone lines in a country of 30 million.

But instead, Kenya leapfrogged past this technology and turned to cheaper wireless technology that has enabled everyone to afford a phone. 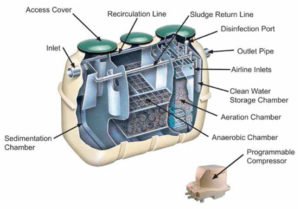 We want to do the same with wastewater treatment, and we have discovered the technology that can make this happen. This enables wastewater to be treated where it is produced. Without expensive extraction and without dumping massive amounts of sewage into the ground where it can leak into our water supply.

This technology is called the Johkasu, which was developed by the Japanese government as an off-grid wastewater solution. It literally turns sewage into clean water that’s clean enough to swim in.

Unlike old-fashioned septic tanks, with this system, you are not just holding the waste and moving it somewhere else… instead, depending on the size, a Johkasou purification tank can treat between 1,000 and 2 million litres of wastewater per day.

>> Find out more about how the Johkasou works here.

Because urbanization means population density and you have to have a formula for handling the human waste, so you don’t waste the humans.

What can you do about it?

According to bylaws, you are able to ask your landlord to keep up their ends of the lease agreement. Like the clear laws against open sewers and water in the street according to respective city councils.

Talk to your landlords and developers and demand that they choose on-site wastewater processing. Tell them about the Johkasou and how it can not only save them lots of money, but many lives as well!

If you want, get in touch with us and give us your developers’ contact details and we will explain to them how they can help prevent this epidemic.